Gems from the Glorious Qur' aan 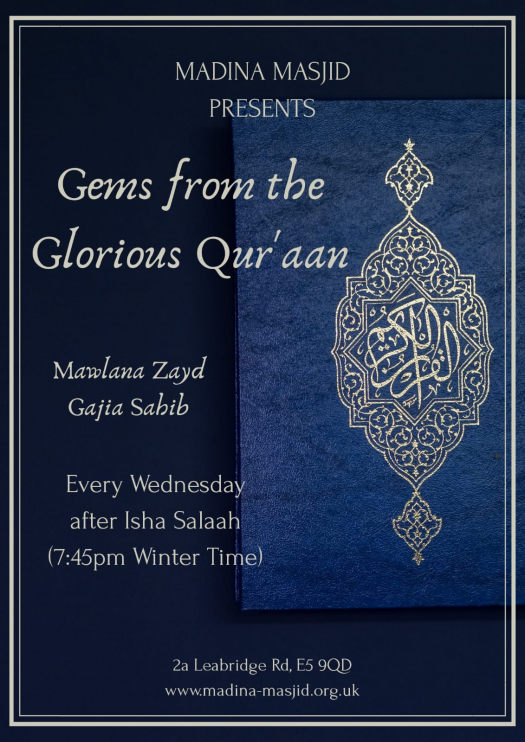 The Glorious Qur'aan is the last and final message of the Creator to His creation. It is the link between Allah ta'ala and His servants. It is the Light that illuminates the darkness; enabling the traveller to reach his destination. The one who lives by it will achieve the ultimate goal of Jannah and the one who ignores it will land himself into the fiery depths of Jahannam. It's revelation began on the best of nights; in the best of months. It was bought down in a delegation of angels commanded by the best of Angels; Jibra'eel alayhis salaam. For the next 23 years the world and its inhabitants were honoured with the Speech of Allah the All Mighty. Finally, once the mission of the Prophet sallallaahu alayhi wasallam was completed and Allah decided to call His beloved back to Him, divine revelation came to a close.

Ummi Ayman radhiyallaahu anha replied, "˜I am not weeping because I am unware of the blessings that have been prepared for the Prophet sallallaahu alayhi wasallam in the next life. Rather I am weeping due to the fact that now Wahee (divine revelation) from the heavens have stopped.' This answer of hers was enough to prompt the two great Sahaabaa to also begin weeping. (Muslim)

Approximately 1431 years have passed since this profound statement of Ummi Ayman radhiyallaahu anha, yet the Glorious Qur'aan; as per the promise of Allah Ta'ala, is with us today and will remain so until the Day of Judgment exactly in the manner it was when it was being revealed.

Alas! That Book which was to be a means of success in this world and the next; for the rich  and the poor, the young and the old, the men and women has now become one more addition to our bookshelves. A mere religious book whose pages will be ruffled once a year in the month of Ramadhan. The Prophet Sallallaahu alayhi wasallam very rightly prophesised,

The weekly lessons of the Glorious Qur'aan hosted by Madina Masjid, Clapton is an attempt to re connect the Muslims with the final revelation. The success enjoyed by the early generations of Islam will return only when we as the latter generation of Islam return once more to the Book of Allah Ta'ala and mould our lives accordingly to it.